A new album by Efrén López and Christos Barbas is always good news, especially if it is the first one by their acoustic duet, culminating 18 years of shared musicianship and friendship. During this period they have collaborated in numerous projects & albums, groups like L’Ham de Foc, Yeden, Aman Aman, Abracadabra and countless concerts in the circles of Labyrinth Musical Workshop in Crete and elsewhere, Labyrinth being another collective home of theirs. On Atlas the two musicians reconnect with the power of the acoustic duet’s sound and its simplicity, through a series of primarily new compositions (Hoquetus, Sadaf, La Nau, Jasmin) and also melodies coming from medieval and ottoman classical traditions (“Ben volgra, s’esser poges”, “Kürdi Peşrev”), with a lot of space and time spent in textural and minimal improvisations. Through years of mutual interaction and shared knowledge, the duet has developed a kind of common vocabulary, a lexicon based on the musical disciplines that each of them have studied in parallel, that are juxtaposed in multiple points and combined with extensive spaces for improvisation, silence and meditation.

The album came into being after the invitation from their friend Constantino López, musician and sound engineer, based in Murcia, southern Spain, to participate in his novel discographic project “Primavera en el Atlas Colección“. The collection consists in the edition of a limited series of records by different artists, created in such a way as to guarantee, above all, the reconciliation of the listener with the music in its purest and most natural state: it aspires to shed light on the art of musicians from a near and perhaps even personal angle by emphasizing the live interaction between musicians and the real feeling of playing together in the same space. Atlas is here – thus – an album name, the life project of Constantino, and also the title of the last track in the album composed by Efrén.

Atlas is many more things: it is the quest for the connection between greatness and smallness, between the supernatural and the natural, the link connecting the world of humans and that of gods; as the ancient greek myth has it, Atlas was a Titan condemned by Zeus to hold up the sky up on his shoulders, at the edge of the western world; another myth tells of how the Titan was turned into stone after an encounter with Perseus, his body transformed into the mountain range today found in Northern Morocco, the westernmost known end of the ancient world. Apart from the Titan giving his name to the Atlantic Ocean, and the maps of the world, we also find his trace inside the human body: Atlas is the name of the first vertebra of the spine, indeed supporting the entire head on the rest of the body. On the musical journey crossing the Atlas – as so many mythologies, religions and ancient philosophies around the word testify – sound and silence are seen as forces that not only create, but also keep the world together. 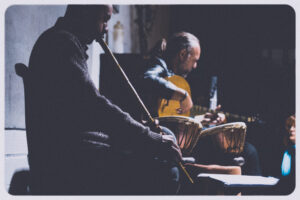 In Atlas the two musicians mainly present original compositions of theirs – both of them being very productive composers throughout recent years, in a variety of different genres – but also revisit compositions they have previously recorded elsewhere. The opening track of the album – The sea – is an open, rhythmless-melody that Christos wrote for the project “Eternal Tides” of the singer of North-Indian music, Sri-Lanka-born Hania Mariam Luthufi, intended to raise environmental consciousness about the oceans and the need for social and ecological sustainability. Here the main melody is only setting the mood and appears at the end of the track, almost as an echo of the original recording for five multi-layered neys. Efrén creates his own “sea” of string sounds, played live, through a heterodox tuning and playing technique. Efrén says: “Inspired by the melody of Christos that offers ample space for improvisation, I have put into practice an idea that I have wanted to try for many years now. I tuned two ouds, a Turkish and an Iraqui one, in such a way that the open strings of both together would create chords and scales that could serve as a base and accompany the ney. The combination of the two lutes creates a harmonic background that resembles more that produced by a kind of harp rather than the traditional sound that someone would expect from those instruments.”

We also find Perasma another original composition by Christos with references in Iranian classical music in a fast 6/8 rhythm, typical in Iran and neighboring cultures. The two musicians had recorded the composition back in 2010 with the group “Yeden”, based then in Thessaloniki/Greece, with the participation of Pedram Khavarzamini on Iranian tombak and Eleni Kalimopoulou on the Azeri kemenche. Christos wrote the piece, being impressed after listening to an improvisation by the great master of the Persian ney, Mohammad Mussavi. In the current recording the duet performs the piece with Efrén on Afghan Rabab and Christos on Turkish ney. This uncommon combination is characteristic of both musician’s approach to Middle Eastern modal idioms: on one hand they are constantly interested in learning new instruments, approaches to ornamentation and techniques, whereas, on the other hand, they adopt a loose stance when it comes to improvising, creating their own musical pieces and/or trying new combinations of sounds, timbres and instruments. 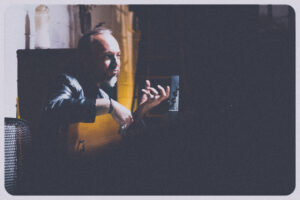 Efrén is a rare multi-instrumentalist, orchestrator, sound engineer and producer, playing a wide range of instruments. His exquisite art can be heard in the composition “Ulls bonics” where he played and recorded all of the 137 instruments he had available in his house at that time (voice included) and of course in his albums “El Fill del Llop”, “Taos”, with the Lopez/Petrakis/Chemirani Trio, as well as the CDs of his band “L’ Ham de Foc” and many more.

About the novelty in recording Atlas, Efrén says: “This work differs greatly from the last productions in which I have been involved. I normally use the studio as a tool and I really enjoy exploring the infinite possibilities this medium offers, dressing the compositions with different colors and tones without worrying about my productions sounding “realistic”. For Atlas, on the other hand, we wanted to get a very naked, simple sound, in an attempt to capture the atmosphere generated in the duet concerts that I have performed over the years along with Christos. One of the advantages of taking part in so many projects of different styles that combine such diverse personalities is that, almost out of need and instinct, one gives prominence to different versions of his musical “self”, depending on the environment in which he finds himself in every moment. But for our López/Barbas duo, in a pretty spontaneous way and through years of mutual interaction and shared knowledge, we have developed a kind of common vocabulary with which we both feel well-represented and really comfortable. A lexicon based on the musical disciplines that each of us have studied in parallel, that are juxtaposed in many points, combined with extensive spaces for improvisation, silence and meditation.”

Other examples where improvisations match effortlessly with rare instrumentations are tracks “Kürdi Peşrev” and “Ben volgra, s’esser poges”, the only compositions in the album that are not written by the two musicians. Kürdi Peşrev is a composition by Tanburi Angeli, a Greek musician who lived in Istanbul during the 17th century. He was a court musician and the first one to be referred to as “Tanburi” (meaning he played the Tanbur, the long-necked lute that is used as a reference instrument for many theoretical treatises on microtonal tunings in Ottoman classical music). The composition is played here with the Afghan Rabab, making use of its natural reverb produced by its sympathetic strings, and introducing fluent melodic movements from other traditions. Both ney and rabab improvise extensively here, not only during the introduction of the piece, but also during the written parts: neither instrument is afraid to leave for some moments the written melody and – in a way dancing around it (melodic lines that cross each other, lose each other and finally meet again in the chorus) – they give the composition a fresh feeling of actually being alive.

Ben volgra, s’esser poges, a song by the troubadour Guiraut de Tolosa (13th century), serves here again as an excuse for an improvisation around its melody. The ney carryies the main melody while Efrén accompanies it with a lute called “Oğur saz”, a delicate instrument that is a relatively new invention of the Turkish master musician Erkan Oğur, from whom it also has got its name.

And then there are the tracks where the sound of the duet becomes exclusively plucked: Hoquetus and La nau are two new pieces composed for two lavtas. The lavta or politiko laouto (lute from Constantinople in Greek) is an instrument that was popular in the early 20th century, particularly among the Greek and Armenian communities of Istanbul. It was gradually replaced by the oud, but since the 1980s there has been a revival of interest in it and now the lavta is again gaining popularity not only in Turkey and in Greece but also around Europe. Hoquetus is a piece Efrén wrote inspired by the medieval technique of musical composition that carries the same name. According to this technique the notes of a melody are shared between two or more voices or instruments, in this case two lavtas, that never play together.

La nau is a piece Christos composed while practicing the lavta, its title taken from the building “La nau” in València where the first ideas came during a sound-check for a concert. However, it also makes reference to the concept of travelling the word “nau” meaning also boat or vessel. Its rhythmical patterns echo the traditional musics from Crete, music with a strong connection to a rich dance tradition, where Christos lived for four years before moving to Catalunya.

Sadaf is the word used, with many variations, in a vast area stretching from Greece to the Indian subcontinent for the mother-of-pearl ornamentation with which musical instruments, furniture and other objects are decorated. The composition of Efrén is inspired by the traditional rhythm and phrasing of the Attan, a seven beat type of ceremonial dance of the Pashtun ethnic group, which inhabits parts of Afghanistan and Pakistan. This dance is usually performed with the rabab, the most characteristic instrument of the Pashtuns.

Jasmin is the fourth composition of Christos contained in the album. The form of the piece comes again from the Ottoman classical tradition. Christos says: “Normally these compositions have a strictly technical name that denotes the mode/makam and the form/rhythm they are written in. Jasmin would be normally called Beyati Saz Semai. I wanted to avoid this name, not so much to make it more catchy, but, perhaps, less technical. especially because the piece was composed during the period when the first lockdown in Spain was ending, in the spring of 2020. During one of the rare walks out of my house, I discovered, next to a small river, a jasmine flower that had literally exploded, flowering over a pergola: un-visited during the pandemic, the color and the aroma of the flower impressed me so much, that – returning home – I felt that I would love that the music I was composing at the time could transmit a similar aroma. Not so much something technical but something deeper, connected with memory, softness and fragility. And this became, in real terms, the sensation with which I ended up perceiving and playing the melody with.”

Lastly, Atlas, the composition that gives the album its name, and also the closing title, tries to evoke a joint improvisation of two musicians in which both have the same ideas at the same time, something highly unlikely.